Just so we’re all clear on that.

I’m not sure where else to post this, but an announcement and it’s important. Feel free to remove this if it really doesn’t belong.

Not sure if you’re meme-ing but shutting the world down over this is a massive overreaction. Wash your hands, stay in reasonably good health and don’t be reckless. If you are in poor health take the necessary precautions. The way all of this is being handled is setting an terrible precedent that will inevitably be used to strip people of personal liberties in the future. 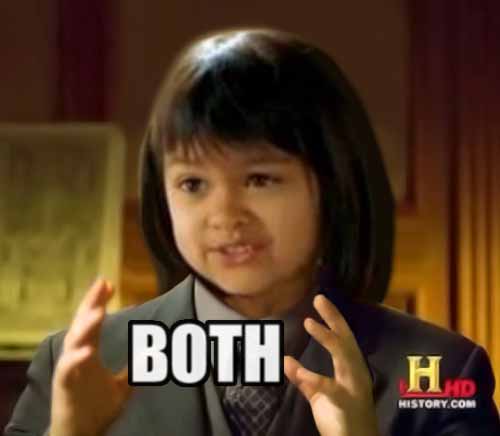 (Speaking as a US citizen here) I think we should do neither really. Corona, by the information that I know, has been blown out of proportion. I mean, if you want to do those things, sure go ahead, it’s a free country. But it should not be expected f anyone to do so.

I’ve removed it so as to reduce the spread of COVID-19 misinformation.

It was not covid misinformation-? Also, there was no point in deleting it if people can still see it easily. I was just sharing my opinion. The federal and state governments cannot force us to wear masks. If a business wants people who enter their doors to wear a mask, then that is the individual businesses right, not the government. If you want to wear a mask, or the business you are entering wants you to wear a mask, then wear it. This is not misinformation. I will not get into my other opinions about covid, as I am sure you would hate them.

I disagree withh almost all your opinions from this to bringing in corporate tech to lemmy ecosystem, but I support your right to voice your opinion and the onus should be on OP to back up their uncited claim rather than using authority to squelch others.

https://www.thelancet.com/journals/lancet/article/PIIS0140-6736(20)31142-9/fulltext (the actual paper referenced in many news articles)

Also interesting how you didn’t call on @Duel to back up their claims that COVID-19 has been blown out of proportion or that masks and social distancing are unnecessary.

I don’t need convincing on your claim, it’s just that making an authoritative statement on an official sounding community board without citing your source in the post and then exterminating the voice of opposition (a privileged position the other did not share) is pretty tyrannical and I object to tyranny. If I could see the objection, I might ask for citation but that is now moot.

For more “benign” types of misinformation, outright removing it might not be appropriate, but misinformation about a potentially deadly disease can get people hurt or killed if someone decides to head it.

Your board, your rules. My objection remains.

1: I never claimed that masks do not work, I said that people should not be forced to wear masks by the government. That is just my opinion.

2: On the subject of social distancing, I also believe that the government cannot enforce it, but individuals and businesses can. If someone asks you to step back, or it is mandated by the business you are entering into (let’s say Walmart), then respect that and do it, even if you do not agree with them.

Literally all I am saying is that the government should not enforce a mask mandate/social distancing, but that businesses/individuals should if they want to, and that we have blown Covid out of proportion. Respect my opinions please, and follow your own rules (rule #2).

I never claimed that masks do not work, I said that people should not be forced to wear masks by the government. That is just my opinion.

And now this person, who said this exact thing, is banned for this reason:

Trolling, being pro-trump, telling people not to wear a mask during the pandemic.

What the fuck is going on with you guys here? I really love the software Lemmy for what it is: FOSS. That’s great.

But the people behind it are the absolute worst FOSS devs I’ve ever met, and also one of the worst moderators I’ve ever came accross. This exact behavior was the reason to search for alternatives for Reddit. And now, we have that here as well.

I know, this is their instance, and as another user here said: Their instance, their rules. I understand and agree. But I just wanted to give my opinion.

I think Trump is an absolutely awful person and it is a bad thing that someone like him is the president of any country. But on the other hand, people banning other people for being “Pro-Trump” is equally awful. I mean it. It’s the same shit, just from the opposite side.

The worst thing here is: I don’t even know if it is true that the user is “Pro-Trump”. I know that the “don’t wear masks” bit is not true, very apparently so, so I can only surmise that the other statements are equally thought through and truthful. This is an absolutely shitty job for a moderator.

Holy shit. Seriously. I’m flabbergasted how awful people can be. If you want, you can ban me, because I don’t think I want to be around in this instance anymore. Not if one can’t speak his mind without breaking the rules but still has to fear being banned because of opinions.

YUP. If the moderation on this instance is anything like I’ve seen in this comment thread then it’s absolute dog shit. Mod is overly sensitive and is likely consooming to much trauma-based entertainment and M5M product. To think that other people need a white knight mod to be so aggressive with banning/deleting or else they’ll consoom fake news and jump into traffic is simultaneously insulting to the user and incredibly arrogant. Nice work mod! Good luck with your shitty board.

I never claimed that masks do not work, I said that people should not be forced to wear masks by the government. That is just my opinion.

That’s what Sweden does. Nobody is forced to wear one in Swede, and nobody is forced to distance himself from others. Of course people are still doing it, and the government is giving out recommendations and updates them according to the current situation.

If the chief epidemiologist of Sweden would comment here, would his comments also be removed because his comments could kill people?

Sweden has no right to speak here lol, their covid response is abysmal (no wonder, since they don’t mandate masks). They’re the 17th worst country in terms of deaths per population, they have 590 deaths per 1M people.

Is removing it fair though? I feel like downvoting to oblivion is a better way to do it… I wanted to know what this guy said, now I’ll never know haha

You can still see it in the modlog. Most removed content isn’t deleted from the server. COVID-19 is no joke and I want to minimize the chances of people getting the wrong idea and putting themselves and others at risk.

Also, as a side note: If everybody can see the comment in the modlog, why remove it here? As you can see, people are curious to know what has been said, and they will take a look.

I have to say… “factually incorrect” is not really fitting here. Not at all.

Every medical professional from China to Europe to the US says that COVID-19 is a major threat to life and that its effects have not been exaggerated (many even claim it’s been downplayed in most of the world), and every medical professional says that masks and social distancing are vital to slowing down the pandemic. What qualifications does this person have to say that “Corona, by the information that I know, has been blown out of proportion”?

Not literally everybody, but I agree that the scientific consensus is that we should be wary and avoid spreading the virus to people who are prone to suffer significant consequences until we know more or have a cure of any sort, so that lives can be saved.

and that its effects have not been exaggerated

That is absolutely not something that any scientist would have ever said. I’m sure that you can see what I mean.

What qualifications does this person have to say that “Corona, by the information that I know, has been blown out of proportion”?

Please take a closer look at the statement. I’m rather sure that I understand what kind of interpretation you had in your mind while reading it, but ultimately, this is not an absolute nor a quantifiable statement. It is a relative statement, and without the context it can’t be “wrong” or “right”. We have to know what the user exactly means with that in order to be able to understand the statement in the way it was made.

I can’t tell you how disappointing it is to try and use a FOSS alternative to Reddit just to see comments deleted because the mod disagrees. Literally hall monitor tactics. FREE SPEECH isn’t a joke and if it’s truly free it isn’t conditional. Having enough faith in people to develop their own opinions isn’t a joke either. Don’t know what this guy said but it deserves to stand and be judged on it’s own merits or lack thereof.

Keep up the good work admins

I really don’t know when censorship became this new awesome idea that people cheer for on the sidelines.

The person was spreading rhetoric downplaying the COVID-19 pandemic, in the US of all places. I hardly care if they’re censored for dangerous rhetoric like that, especially on a random forum online.

Random forums online used to be where people had conversations freely. Instead even FOSS projects are mimicking failed social networks that editorialize to block out all but a certain viewpoint. I probably agree with that guy. I DO think that this is all over-hyped and we’re stopping the world for something that has a mortality rate similar to a bad flu season. But of course conversations are stopped before they are started just so people can jerk themselves off and feel good for ‘saving somebody from misinformation’. Give me a break. If the Lemmy project has proved anything to me in this thread it’s that the Reddit ‘consensus’ model just promotes mediocre discussion where variants from the norm are blotted out.

Other than that, this is reserved for admin use only.